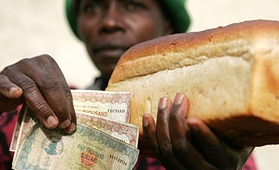 President Robert Mugabe immediately warned in a televised address that he will impose a state of emergency if profiteers take advantage of the change on Aug. 1.

''Don't drive us further. If you drive us even more we will impose emergency measures. We don't want to place our country under emergency rule,'' Mugabe said.

Computers, electronic calculators and automated teller machines at banks have not been able to handle basic transactions in billions and trillions of dollars.

Just last week Gono introduced a new 100 billion-dollar note that is not enough to buy a loaf of bread.

Gono said on Aug. 1 the bank will issue a 500-dollar bill equivalent to 5 trillion dollars at the current rate.