What Will She Wear? Gabourey Sidibe Says She Is Oscar Ready 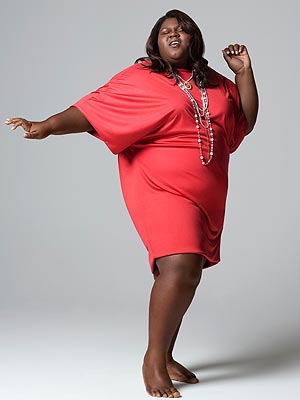 Pop Sugar caught up with newcomer Gabourey Sidibe at this year’s 3rd Annual Black Women In Hollywood Luncheon hosted by Essence. They learned that she is Oscar ready for this Sunday’s (March 7) Oscar Awards. Gabby has been nominated for an Oscar for Best Actress in a Leading Role in the film “Precious: Based on the Novel ‘Push’ by Sapphire.”

Several rumors are floating around that fitting Gabby for a high-end designer dress is near impossible because of her size, but Gabourey’s stylist Linda Medvene says those rumors are “absolutely not true.”

Rumors also began to circulate saying that Sidibe was being fitted to wear Marchesa for the big day. Her stylist, Medvene says those rumors are also false.

“She is not wearing Marchesa, that’s untrue. I don’t know where everyone is getting this information but it’s not true,” Medvene insisted.

Everyone knows Sidibe is no size two super model, but as some have pointed out, it is nice to know she hasn’t allowed the pressures of Hollywood to taint her highly-deserved awards season experience.

“This is an amazing experience for her, and she’s an amazing human being and she’s thoughtful, kind, brilliant, and she’s just on cloud nine, she’s thrilled,” Medvene said. “She is really easy (to work with) and she’s smart, she’s nice, she’s beautiful and it’s been a really fun project. I’m sad that it’s coming to an end.”