Wow: I AM VOICE OF THIS GENERATION says Kanye West 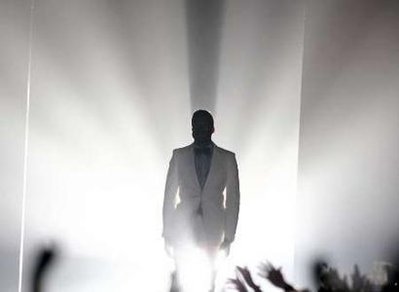 Kanye West is to music what Michael Jordan was to basketball  (at least that's what West thinks, in his humble estimation).

“I realize that my place and position in history is that I will go down as the voice of this generation, of this decade, I will be the loudest voice,” he said in an interview on Wednesday. “It's me settling into that position of just really accepting that it's one thing to say you want to do it and it's another thing to really end up being like Michael Jordan.”

The Grammy-winning rapper-producer said Justin Timberlake had a chance to be music's MVP, but hasn't put out enough material. (Timberlake's last album was in 2006, while West released a CD last year and is releasing his latest  “808s and Heartbreak” on Nov. 24.)

West, 31, said life has been difficult since his mother's death. Donda West died last November after having plastic surgery.

“I'm just going through balancing that. And I always used to have that support system, you know. My mom would be there; no matter what, she was there before everything,” he said. “We were together for like 30 years. And you know now when I'm on that stage and I look out and I say, 'What am I going to do with the rest of my life?' Like when does a real life start?' Because I have sacrificed real life to be a celebrity and to give this art to people, which is great. It is great that I was able to do that, I'm not trying to shun that in any way, but it's definitely a Catch-22 and it's bittersweet.”