George Zimmerman was released around midnight Sunday (April 22) from a county jail on $150,000 bail as he awaits his second-degree murder trial for fatally shooting Trayvon Martin. 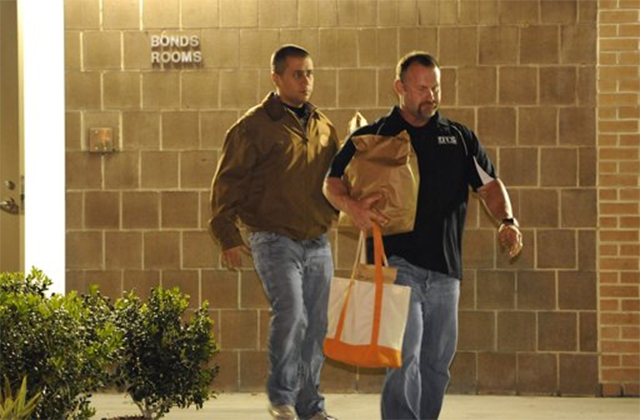 The neighborhood watch volunteer was wearing a brown jacket and blue jeans and carrying a paper bag. He met a man in a white vehicle and drove away. His ultimate destination is being kept secret for his safety and it could be outside Florida.

Circuit Judge Kenneth Lester said at a hearing Friday he cannot have any guns and must observe a 7 p.m.-to-6 a.m. curfew. Zimmerman also surrendered his passport.

Zimmerman had to put up 10 percent, or $15,000, to make bail. His father had indicated he might take out a second mortgage.

Meanwhile, the Neo-Nazi Socialist Movement, one of the largest hate groups in America, stormed the state Capitol in Frankfort, KY on April 21, 2012 for their annual celebration of Hitler's birthday. In the following video, the KKK & NSM members are heard chanting “Trayvon Martin Burn in Hell.”

Over 100+ protesters comprised of Occupy Louisville, the Fairness Campaign, & Kentucky State University students were in attendance for a stance against the movement.